Ran my newly installed Minnkota 80AP trolling moter today. The motor was able to pull the boat about 4mph and handled the chores given it easily 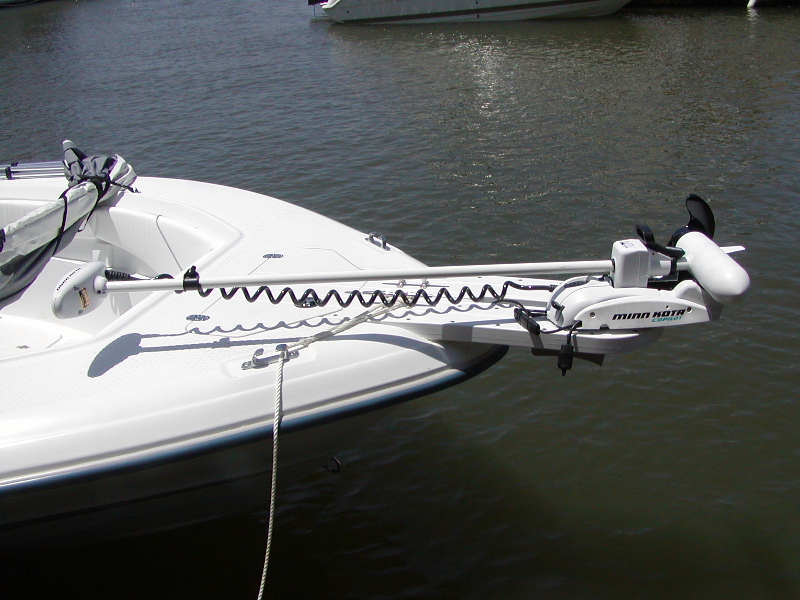 I stowed the batteries in the megahold. 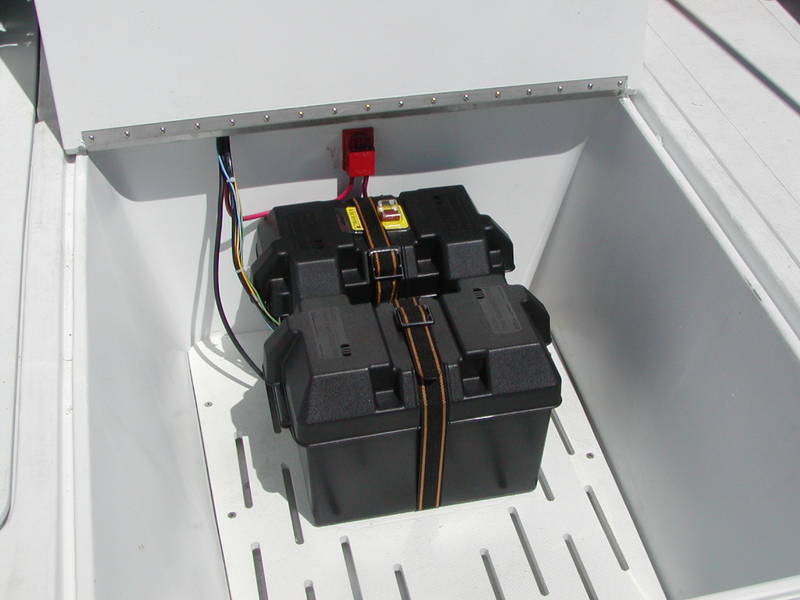 Would that motor have enough clearance to be used on a 215 with a bow rail?

Jergofish, That looks very professional. But your boat is too clean.

Would that motor have enough clearance to be used on a 215 with a bow rail?

THAT IS A VERY GOOD QUESTION I WOULD LIKE TO KNOWFOR SURE!!!!

Codfish, if you saw the boat now you'd eat your words. I'm back from a month and a half in Baja Sur, Mexico. The boat's been in the ocean for a month and has barnacles and algea all over the bottom. Has dust everywhere from having been dragged over a hundred miles of dirt roads, was rained on and the dust turned to mud and has two thousand miles of road grime. Inside it still has the blood stains of many Dorado and one giant Humboldt squid. It will take almost a week to clean but I'm going to try to get it to look like it did in the picture.

braley and SOCALFISHERMAN,
I'm ALMOST sure you could attach the motor with the bow rail. It raises and lowers on a tilt and swings backward so it should clear the bowrail top. The question is could you mount it sideways enough to clear the down rails from the bowrail. If not it would cover the anchor locker when folded down. If I was you I'd go to a MinnKota dealer towing your boat and try the fit. It would take two people, one holding the motor in place and another operating the raising an lowering of the motor.

I didn't get the bowrail since I flyfish and the bowrail is a definate fly rod breaker. The trolling motor is indespensible for fish hunting. In Mexico I used it in the open ocean when crusing paddies of sargasso for Dorado and for keeping myself off the rocks when rock fishing. Also used it for moving around on some big flats.

At another location I used it for running a half mile of mangroves against an incoming tide, fishing for grouper. The trolling motor is so much a part of my fishing stratagy that it was a deal maker/braker as to whether I could mount it on the boat or not. Many of the other offshore skiffs bows are SO high that the installation of a trolling motor would be impossible.
JerryInLodi
"No Nonsense" 2006 215, Suzuki DF175
DeltaStripers.Com

Very nice install Jergofish. It is great to know that someone has found a trolling motor solution that works and has been field tested hard!
19' Carolina Skiff w/60hp Suzuki 4-stroke
2004 Ford F250 Super Duty King Ranch Super Crew 6.0L Diesel
Check out our new website: https://www.thebackyardfarmer.com
“Our love grows soft if it is not strengthened by truth, and our truth grows hard if it is not softened by love.” - John R. W. Stott
B

Thanks for the information. I will try going to a dealer to see if it will work. I relly miss having a trolling motor since I sold my 190 to upgrade to 215.

thank you for the info i will be headed down to west marine tomorrow and see if i can try it on the front.
L

Jergofish....... Nice looking install, what model Minn-Kota is that and how long is the shaft.......LSU Tiger.

In the ocean you really need the long shaft when you're up against the rocks and some swell is coming in. Otherwise the engine lifts out of the water on the swell and the prop spins and torques the whole thing causing the AP to go crazy.

Hey Jergofish, USC plays out there in that "wine and cheese" league, they would'nt stand a chance down here in the "beer and bar-b-que" league!

Isn't barbecue sauce salsa without the kick? USC, in the land of the Habanero and Jalapeno!
JerryInLodi
"No Nonsense" 2006 215, Suzuki DF175
DeltaStripers.Com
B

I just finished installing a motorguide 75# wireless trolling motor on my 215. It will stow and deploy with the bow rail attached. I will try and post pictures when I get a chance to take them.
B

Some pictures of the trolling motor mounted on the 215 with bow rail in place.

braley - that looks like a nice installation. I have a some of questions I would like to ask. (1) How much clearance do you have between the bow pulpit and the bow rail? (2) How hard is it to deploy and recover the trolling motor past the rail? (3) What did you do with the bow navigation lights?

I am seriously thinking about buying a 195DC and the mounting of a trolling motor without removing or cutting the bow rail is one of a couple of issues I am trying to resolve before plunking down a bunch of money.

Thanks for any help.
B

I followed the directions from jergofish for the most part they are located in this thread.

2) It is fairly easy to stow and deploy. The motor will swing up and down on an arc and you can raise or lower your motor shaft as you do this.

3) I followed jergofish's great advice and moved the bow light underneath the bow pulpit and reversed the lense. I did have to delaminate the top layer of the bow plulpit to get enough wiring to move things around.

If you carefully align things you will also be able to open and close the hatch to the anchor locker. It just takes abit of measuring before you drill.

Braley, thanks for the info. I thought it looked like the 215 has more bow rail clearance than the 195 so I may have a problem there. The 195 has about 12" I think. If I buy the boat I may have to cut the bow rail and make some S/S adapters to make the cut section able to be taken in and out. Oh well, I can do it, I just hate to cut that nice rail. I thought I could see the bow light hanging underneath, but the picture was a little dark down there. Trying to buy a one size fits all boat can be a problem. Thanks again for your help.
J

Nice trolling motor set up on a 210! I have been considering upgrading from my 190, but thought that the boat could not be ordered w/out a bow rail. Were you able to special order it or did you remove it? Great mega water bass boat! -- JT
Y

Any one figure out how to drill the holes between the mega hold to feed the wires? Looking to clean up my install
You must log in or register to view replies here.