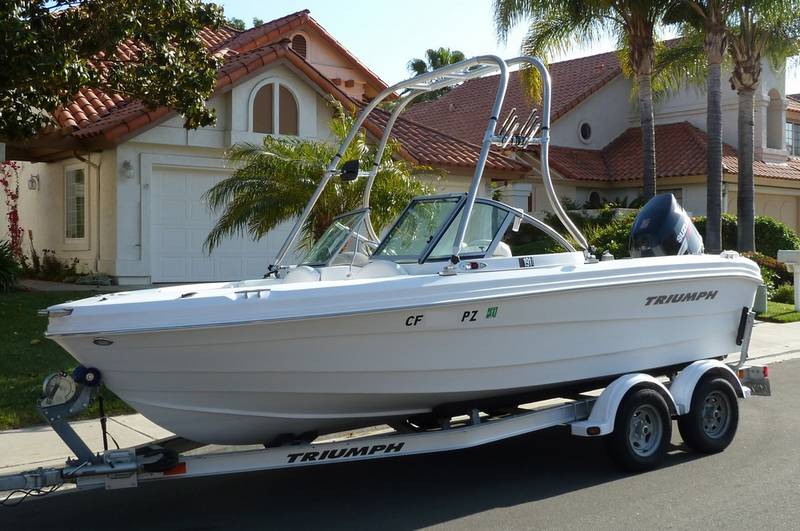 Wakeboard Tower Installation on a Triumph 191fs - by Marcusk
​
I decided to install a wake board tower onto my 191fs. I have the ski pylon that came with the boat, and have used that for two seasons, but I wanted to see if having a real tower would make a big difference in getting more air, and in helping beginners get up for the first time. The tower sits about 7' off of the deck, while the pylon was only a little over 3'. 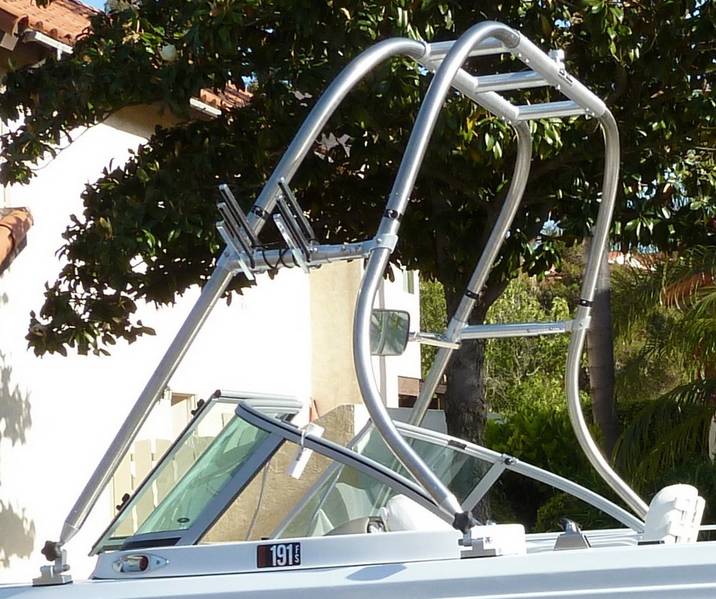 After a lot of research, I settled on the "H2O" tower from Big Air Wake Towers. It is a pretty reasonable price, and has a nice style that goes well with the boat. I got the brushed finish, but you can also get powder coated versions. The cost is ~$800-900 plus $90 shipping, depending on which finish you select. I also chose this tower since it can fold down easily in order to fit my boat into the garage without completely disassembling the tower. Note that the tower is delivered by UPS in a surprisingly small box (maybe 5' tall, x 22" x 8"). The tower comes in 13 main pieces. When you assemble it, you will end up with 5 pieces that can still be easily separated with steel pins. When you order the tower, you will need to give them a couple of dimensions depending on where you want to locate the four mounting brackets. You still have several inches of flexibility from those dimensions when you do your final assembly, but that just gives them an idea of how long to cut some of the tubes to get you close to the right size.

The tower is designed to be mounted with four universal brackets fastened to the gunwale with two 3/8" stainless bolts and an aluminum backer plate along with rubber gaskets. Since Triumph hulls are one piece and hollow, there is no easy way to get to the under-side of the gunwale in order to install the backer plate without cutting a large access hole in all four locations. I wanted to avoid cutting such large holes in the hull, but of course I also wanted to securely mount the brackets. I decided to use three "Toggler" brand SnapToggle stainless anchors for each of the four mounting brackets. 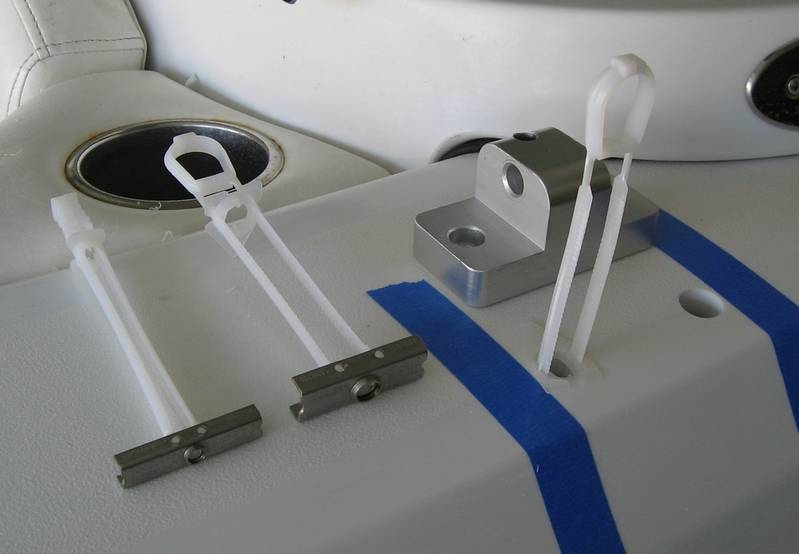 For each bracket, two fasteners were the 3/8" size to fit the original bolts, and I drilled an extra hole in the bracket for a 1/4" fastener for some extra anchor surface-area and strength. Most of you are probably familiar with these fasteners, since they are commonly used to securely fasten items on boats (chair mounts, etc). Their strength rating is extremely high (several hundred pounds tensile and shear), so my only worry was that they would rip through the plastic. That's why I wanted at least three per bracket, to give as much surface area grabbing the plastic as I could.

I wanted to be able to still have my bimini top fit my boat with the wake board tower installed, so I installed the mounting brackets as far apart as possible to give me just enough clearance. I could have mounted them even further out by installing them on the 45 degree angle section of the gunwale, but I was worried about the added stress that would be on the bracket from being mounted on an angle since I wasn't using the backer plate, and just relying on the toggler fasteners. One problem is that the inside surface of the gunwale isn't perfectly flat near the edges of the gunwale. It is rounded due to how the material is distributed in the hull molding process. That made it difficult for me to bolt the bracket on squarely. I ended up using a special heat-gun to heat up the snaptoggle anchor and then quickly screwing in the bolt and pulling up on it in order to allow it to slightly melt into the plastic on the inside of the gunwale, so that it would seat squarely, and pull straight down on the bracket, instead of at an angle. This worked well, but was very difficult to do and required a lot of patience and a special heat-gun (used for soldering or desoldering electronic components). If possible, I recommend mounting the brackets a little further towards the center of the gunwale than I did, so that you won't have to deal with this issue. 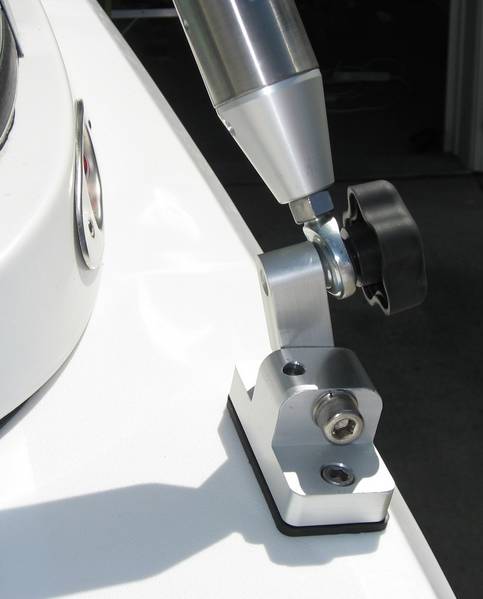 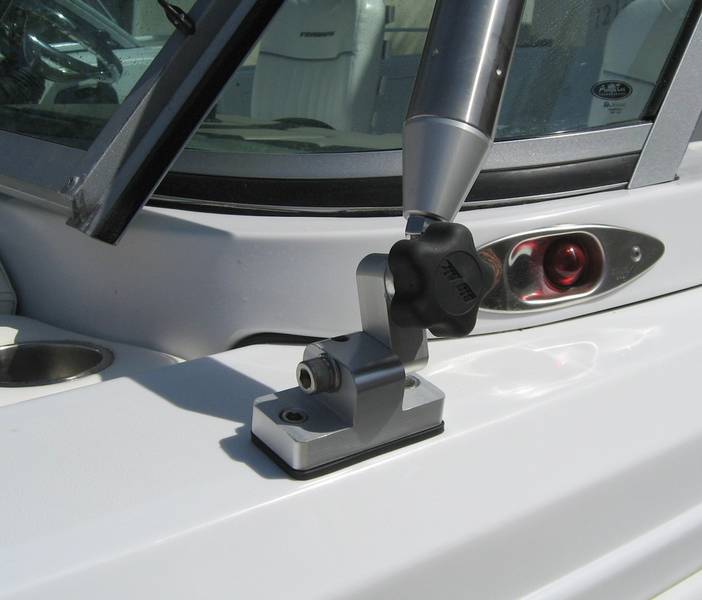 Since I ordered my tower without any powder coating, there was some extra clearance when I slid some of the tubes together. Since I wanted to do whatever I could to avoid any rattling noises, I decided to add some layers of 3M adhesive aluminum tape to certain areas that had too much clearance. This worked perfectly to provide a tight fit in those locations (primarily the cross brace connecting the pairs of uprights).
One of the biggest assembly challenges was drilling the holes into the stainless tubes of the tower. Note that this tower uses stainless tubing for everything except for the top horizontal "H" section, which is aluminum. In order to assemble the tower, you need to drill several holes into the stainless tubing with the supplied drill bits. The keys to doing this is to use some oil, use a low-speed drill, and apply a LOT of pressure as you drill. The more you can get the drill bit to bite by applying pressure, the faster and easier it will be to drill each hole. Otherwise it will take forever. As some of you know, if you try to use a high-speed drill, you're only going to harden the stainless.

In order to fit my boat into the garage, I just have to unscrew the fasteners for the two front legs by hand, and then pivot the whole tower back. Then, you pull 3 pins on each of the front legs, which will detach them from the rest of the tower. This will leave you with a total height that is pretty close to the same as the windshield height on the 191fs, and it should fit into most garages. It doesn't require any tools to fold down the tower, or to completely disassemble it. 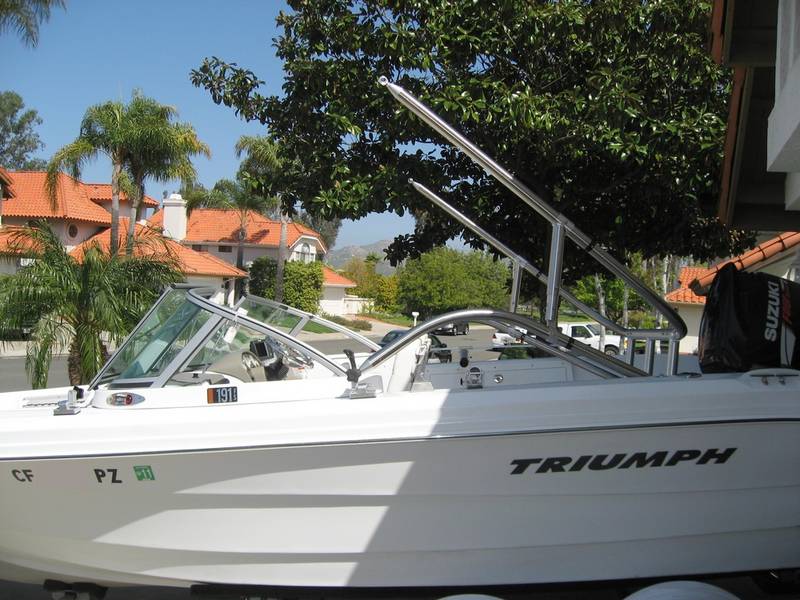 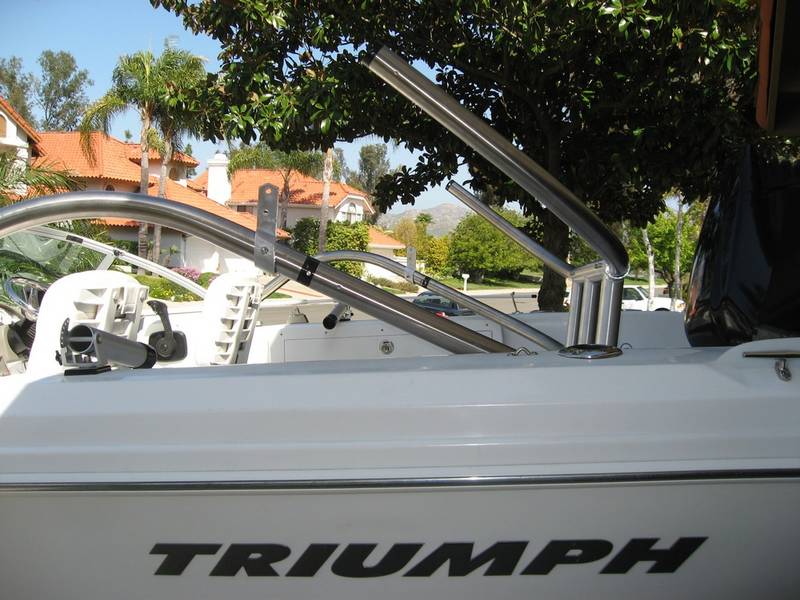 When I convert my boat for fishing, I like to take the whole tower off of my boat to get it out of the way. (In the future, I might try adding some rod holders to the top and leaving it on the boat for fishing). It is pretty easy to disassemble the rest of the tower to completely remove it from the boat. Just two more pins and two more hand-screws. I installed a few large bike hooks in my garage to store all 5 pieces of the tower very conveniently. 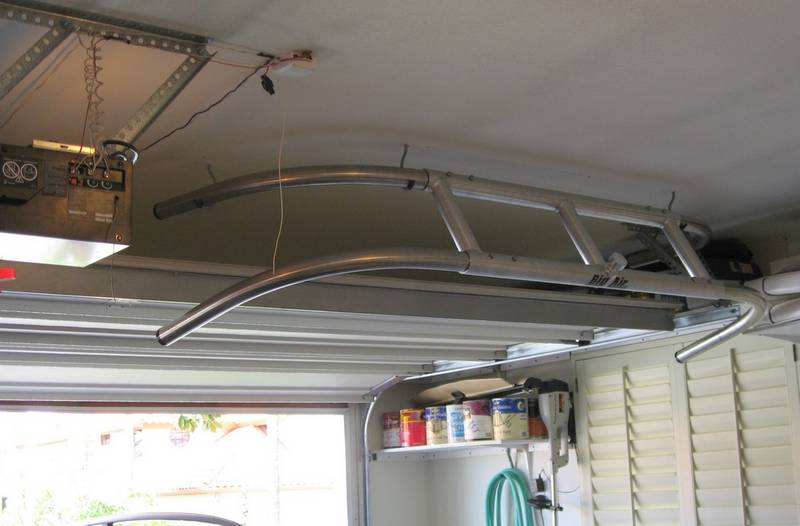 I also bought a basic mirror and board rack from Big Air Wake Towers, and so far I am happy with them. They are a lot cheaper than most alternatives out there, and they still get the job done and are decent quality.

Purchase list
I purchased most of the items that I used in this install from the following vendors: 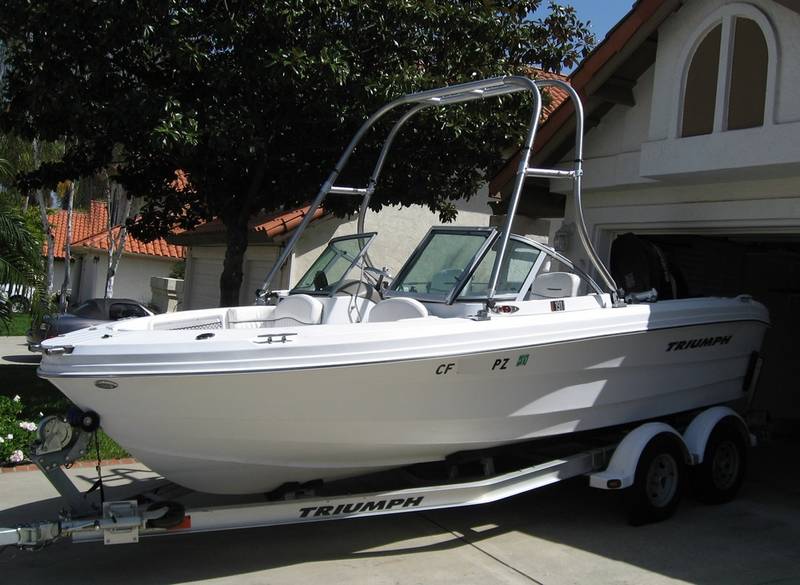 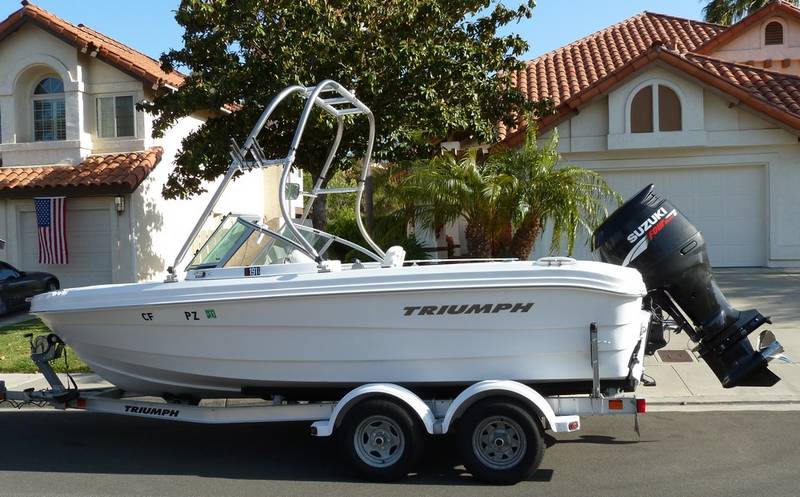 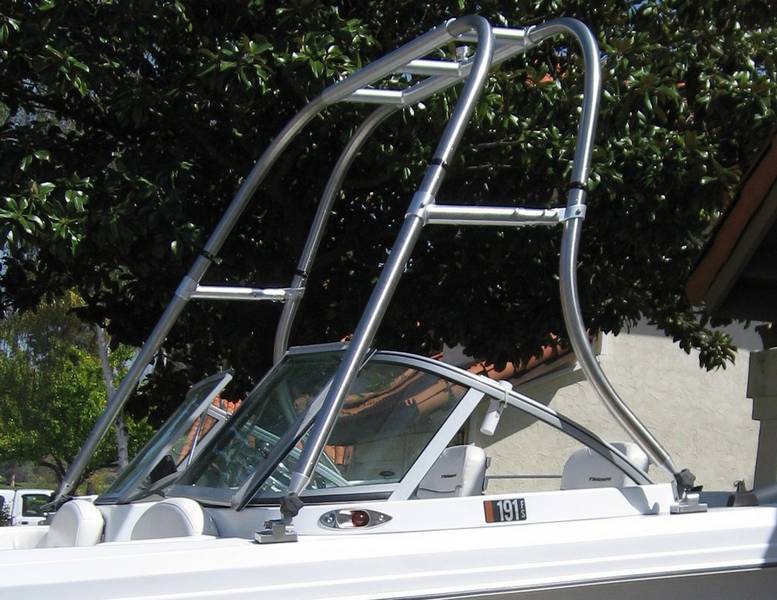 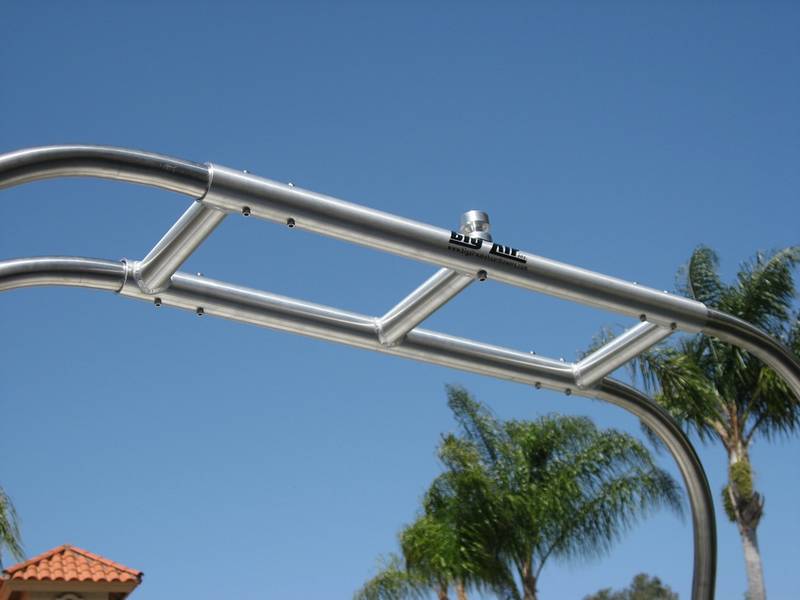 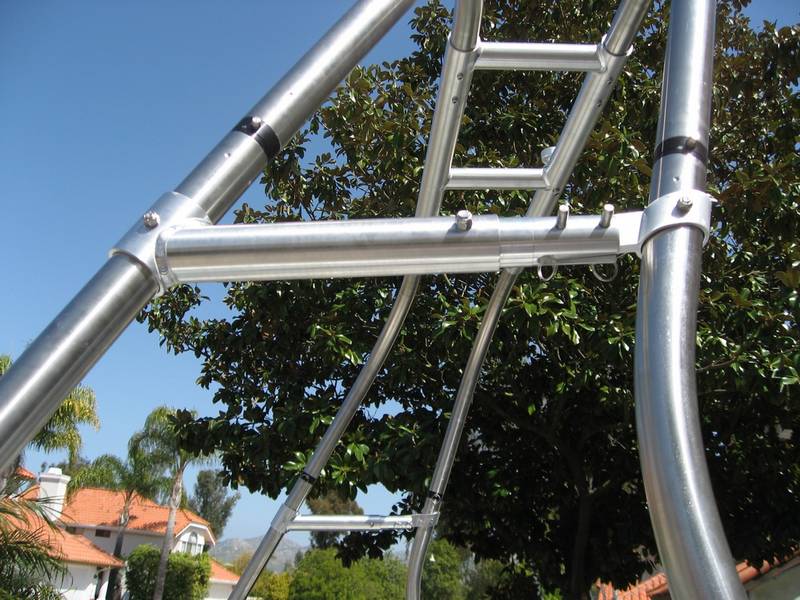 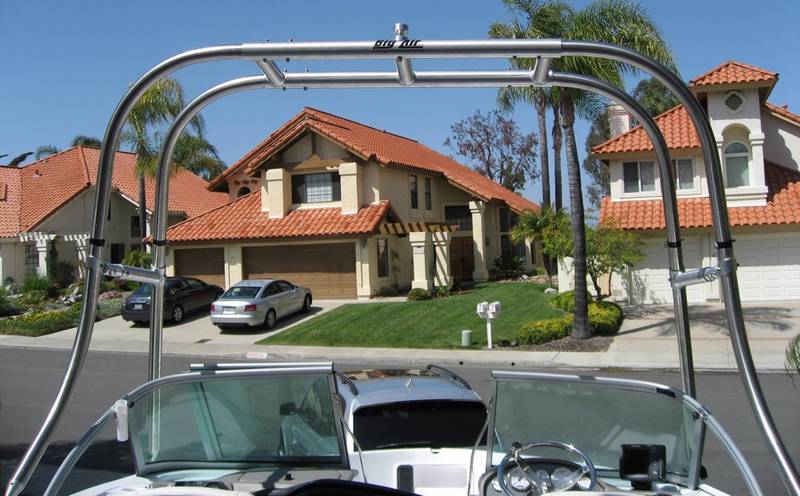